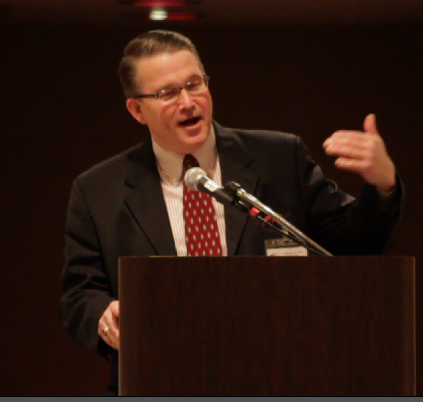 Recently, bail agents traveled to Las Vegas for the Professional Bail Agents of the United States (PBUS) conference. During the opening ceremony the Honorable Judge John McBain delivered a charismatic speech to attending bail agents and shared his personal experience in working with private bondsmen, thoughts on pre-trial release and bold criticisms of legal professionals who do not support private bail. The former prosecutor and criminal defense attorney offered his support to attending bail agents during his speech.

On the Bail Profession

“Your profession gets no love,” McBain proclaimed to attending agents, “no real love from several critical stakeholders in the criminal justice system. Both the American Bar Association and the National District of Attorneys, and members of both professions have been vocal in their criticism of the bail bond business.” The former criminal defense attorney was not afraid to express his criticism of legal professionals who do not support private bail, explaining that, “a big juicy cash or surety bond translates to a defense attorney as less money for attorney fees,” and pointing out that, “[for] whatever criticism the American Bar Association makes about bail for profit fees, they rarely put any focus on attorney fees which often border on the parameters of handsomely compensated to outrageously compensated.” The Jackson County judge was quick to assure bail agents of his own support and that of his peers, saying, “I want you to know that the National Judges Association is not one of your critics. In fact, we overwhelmingly support and understand the critical role that commercial bond agents play in the administration of our justice system.” The applause from attending bail agents grew so loud it nearly drowned out McBain’s declaration.

McBain also explained how programs like pre-trial release have shaped his view of private bail. “Part of the problem with pre-trial diversion is it’s a government program,” he explained. “I hate to see the government take over something that a commercial industry already does well.” As for the rising trend of utilizing risk assessment programs to promote pre-trial release, McBain deemed the programs unnecessary. “We do a good job of assessing risk without the need for that, and what I see is just another level of government involvement which is going to cost taxpayers significant money.”

He also noted the effects that pre-trial release and personal recognizance bonds can have on docket management and fugitive recovery, explaining that his peers who have severely backlogged dockets usually have long history of writing personal recognizance (PR) bonds.  As part of his speech, the Missouri-based judge said there are many secrets to his historically efficient docket. “It was not because I gave out a bunch of $100,000 personal recognizance bonds in what’s naive enough to believe that these defendants would just show up,” he said. “What a joke those bonds are. The criminal defendant shows up when they want, no one tries to enforce them when they default, the cops don’t make meaningful efforts to pick up those individuals as a matter of high priority, and there are thousands of them pending in most jurisdictions.”

With a broad difference in motivation between a police officer and bail agent when it comes to recovering a skip, McBain highlights the benefit of having a defendant out on a string to a private bondsman. In the event of a skip, he explains, “I pick up that phone, and I go, for example, Jeff, you’ve got a skip and he missed out on my courthouse hearing today. And I usually have that defendant back inside a week.” A grin spreads across McBain’s face as he explains that a call a bail agent will always answer is from a judge, concluding, “the few skips I get are usually reeled in by their bail agent very quickly.” As for a skip on a PR bond, “many of them are at large for years until they are stupid enough to come into contact with a cop, usually on a routine traffic stop,“ McBain said. Skip recovery is a critical aspect of the bail process, and the longer a fugitive is on the run the greater the effect it can have on a case. “Criminal files are not like fine wines,” the judge examines, “they don’t get better with age. And the more quickly you can process a case, the better result you’re going to get.” Expanding on the subject, McBain explains that critical evidence is lost and the will to commit from the victim begins to wane when a fugitive is on the run for a significant period of time. “Justice delayed is almost always justice denied,” he proclaims, ”especially for crime victims.” In further explanation, McBain made it clear that he believes private bail is the best option for all jurisdictions.

On States That Do Not Allow Private Bail

“While the bail for profit system is uniquely American,” he explains, “it works amazingly well and it’s efficient.” Though a program exclusive to the United States, there are some jurisdictions that do not allow private bail. Washington D.C., Illinois, Kentucky, Massachusetts, Maine, Oregon, Wisconsin and Philadelphia all require bail applicants to go through the court and do not allow private bondsmen to operate in their locations. “It’s really interesting,” McBain explains, “The states that have abolished commercial for profit bonding have some of the most backlogged dockets, and now for the first time you’re even hearing prosecutors from Oregon, Wisconsin, Illinois and some of those states say, ‘You know, I think we made a mistake.” McBain concluded that he wouldn’t be surprised to see some of those states change their position on private bail, describing it as an integral part of the American justice system.

Judge McBain was a speaker at the PBUS 2012 conference in Las Vegas. He also took the time to sit down for an interview to further explain how his experience has shaped his opinion of private bail.

McBain has never been one to shy away from a controversial topic. He received both praise and criticism for rejecting a father’s no contest plea for sexual and physical abuse charges against his three month old daughter, and in a separate case ordered that the photo of the woman a drunk driver killed hang in his prison cell. As a legal professional that has devoted most of his career to the inner workings of the justice system, it is clear that the former prosecutor and defense attorney will remain a strong and vocal supporter of the bail industry for years to come.