What You Missed at the PBUS Winter Conference

On February 24th, bail agents kicked of the 2013 Professional Bail Agents of the United States (PBUS) Winter Conference with the First Time Attendees Reception at the Mirage Hotel and Casino. Members from across the United States enjoyed networking opportunities, educational speakers, information on new products and services, and more.

Here’s what you missed at this year’s winter conference

One of the major focuses of this year’s conference was a campaign to raise awareness about pretrial release. The Pretrial Release Campaign was held during a two hour session last Monday, and attendance was so high the room had to be expanded in order to accommodate so many occupants. With the room full, Melanie Ledgerwood with Accredited and Dennis Bartlett with the American Bail Coalition shared statistics about pretrial release and commercial bail and discussed some of the issues with what has been presented to the public.

According to the presentation

“Without commercial bail, first of all the criminal justice system would collapse tomorrow,” Bartlett explained. He noted that in spite of that fact, a group he calls the Bail Reform Movement is attempting to eliminate the use of all money bail. “One of the reasons we’re doing this [campaign] is to alert [bail agents] to the fact that these people are going around, talking to their county supervisors, talking to people in the public arena, basically with the idea of undercutting the great role and contribution that commercial bail makes in the United States.”

Getting past the negative perception of bail agents

Another hot topic at the conference was overcoming the public’s negative perception of bail agents. Judge and former prosecutor Leslie G. Johnson encouraged bail agents to speak at public civic clubs and organizations, speak at criminal justice programs, and at career days at schools. “I think the biggest misconception about bail agents is that they are low-lives,” Johnson said. “It’s an honorable profession and I think we should push the honorable part of it and show what good bail bondsman do in the criminal justice system.”

A response to claims that commercial bail's supposed inefficiency is cause for switching to pretrial release:

Any industry that collects 10% with a payout risk of 100% would go out of business very quickly if their system was ineffective. 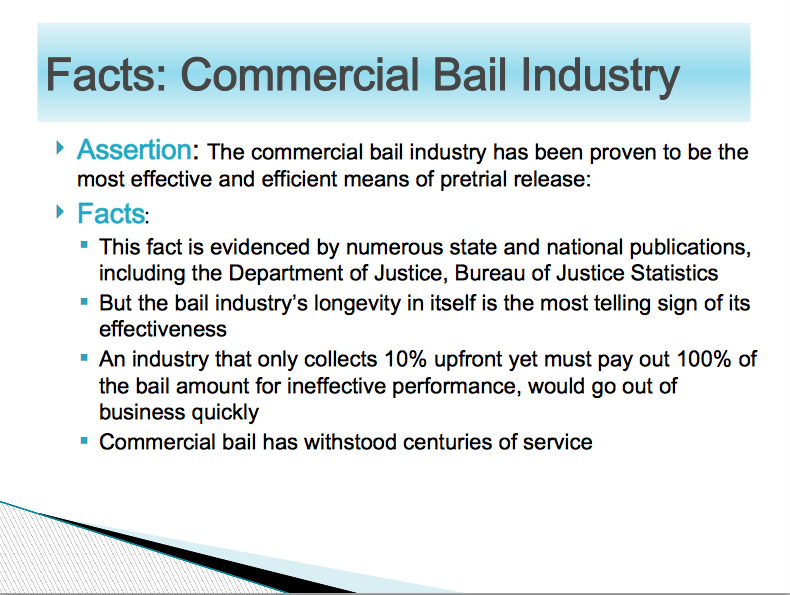 More on speakers and topics

There were a variety of educational seminars presented at the PBUS conference. Stay tuned for videos, articles, and more details on: